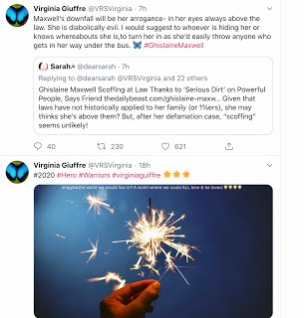 My American buddy Bobby from The Jeffrey Epstein Show says this year is the one where the predators become the prey. Cheers to that.

He asks some good questions on his podcast today about Ghislaine Maxwell:

“With as much evidence that has been produced it’s mind boggling that Maxwell still remains in hiding and not in a chair in front of federal agents.

Will she eventually turn up on her own or will the authorities have to track her down?”

People know where she is and the same goes for the FBI. If the US law enforcers don’t know, they should give up and hand the job over to Jen & I.

We are not scared of you, Ghislaine Maxwell.. Someone will betray you. That’s how it will end.

Is it lonely? Do you miss the Dubins, Dershowitz, Bill Clinton or Sarah Kellen, Ghislaine? We know you are happy Jeffrey Epstein is dead. We all are actually but it should have been after he faced justice.

If I was to guess, I think Prince Andrew is hiding her and paying her legal fees. He has all that Middle East bribe money from his days as a trade envoy aka Air Miles Andy.

As we say on the Prince and The Pervert Podcast, The Falkland Islands is a good idea for banishment or Christmas Island, it is already set up for Ghislaine.

But it’s a new year. A new decade. It’s coming, Ghislaine Maxwell, you might as well get a yacht, name it after yourself and wait. 🦹🏼‍♀️

(I realise this is my second post today but I am passionate about this continued injustice. Jen and I are here for the long-haul. This is the most important story in the world at the moment and people are trying to shut it down.)

It is about the victims, that’s why were here with this.

Do you think Epstein killed himself? Was Epstein murdered? What about Epstein’s Clinton painting? Why was Epstein taken off suicide watch? Can Prince Andrew sweat? Did Prince Andrew step down?