Skip to content
Hello fellow #EpsteinDidNotKillHimself truth seekers, it’s Jen, the short one of the duo that brings you The Prince and the Pervert Podcast.
I’ve been busy reading up on all the main players in the Epstein case, but I thought it was time to update you on one of the crucial resources we use to find news stories, and some great conspiracies, it’s Twitter and it’s a goldmine.
So much info is being shared over there, and that’s what we love about Twitter, people share, they don’t hoard information. Some of the theories are, well crazy, but there’s some great links to old news stories.
Despite being on the bottom of the planet and in completely different time zones to most of those following the Epstein child sex trafficking case, we can always find someone awake on Twitter to chat to.
So if you are on Twitter you can find us tweeting at @lisaltait and @ohreallytruly.
Keep an eye out for the various #hashtags such as #JizzStain for Ghislaine Maxwell along with #PrinceAndrew #Epsteincoverup #Epsteinsblackbook and of course #Epstein.

Below are some of this week’s highlights.

On Monday, March 9, we in Australia raced to turn on our national broadcaster, the ABC, to watch the advertised 4Corners Epstein episode. Sadly for Lisa and I, it was Panorama’s show from 2019, but it’s a huge boost for the case as apart from a few articles around the time of his ‘suicide’ there hasn’t been much exposure at all in the main stream or legacy media in Australia. 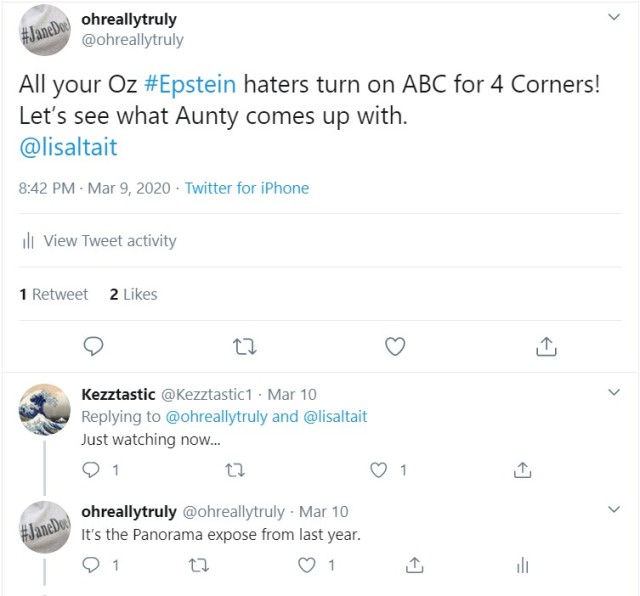 The Panorama piece was well researched and a polished production so we’re hoping that more people start chatting about the case.

Of course as a lover of the low level troll, Lisa threw out another idea on twitter as a way to try and push Prince Andrew into talking to the FBI.
We’re hoping that celeb lawyer Gloria Allred picks up on it, like she did with our, may I say, BRILLIANT idea of putting billboards with wanted posters of Andrew on the side of buses and driving them around London to try and shame him into talking to the FBI.
Yes, Gloria Allred had a bus with Andrew’s mug on it and the FBI’s number drive past the Palace. 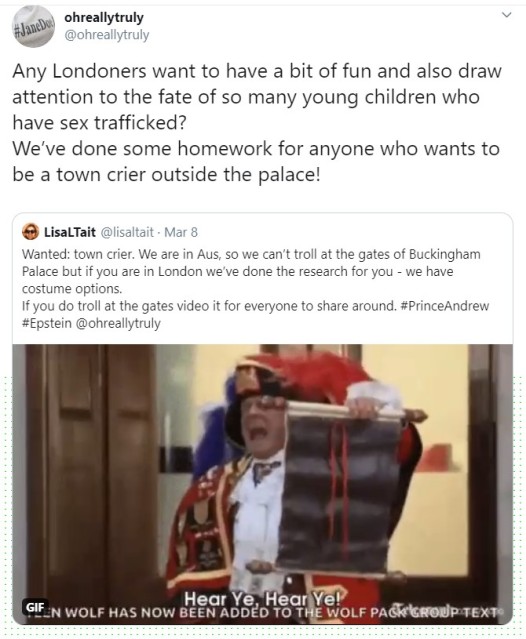 And when it comes to low level trolling we opened up a Threadless store which of course we HAD to share.

Of course as soon as we had the store up and running, we just had to test out how to buy a sticker.
And then we sent it to Fergie. And because we’re who we are, we videoed the whole transaction to show just how easy it is.
All funds made from the Threadless Shop will be donated to Virginia Giuffre’s (a survivor of Epstein and Prince Andrew) non-profit organisation aimed at assisting victims of sex trafficking, victimsrefusesilence.org 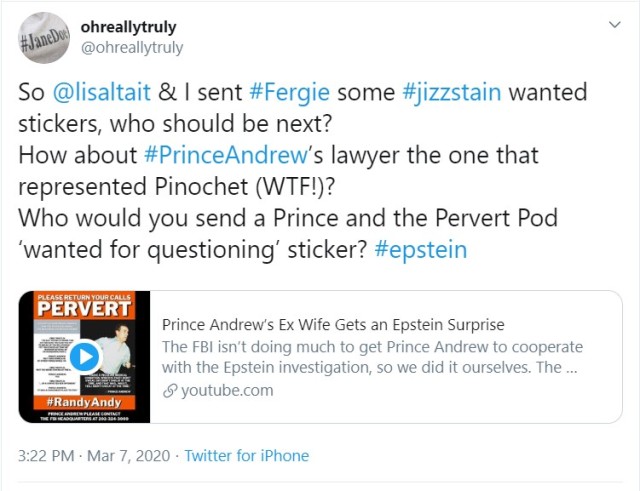 If you want to read the Nygard complaint head over here.  It’s another case that we are following, Canadian fashion designer Peter Nygard.
Someone leaked a copy of the case against him. Is it legit? Is it false, fake news? We don’t know but it’s an interesting read and shared by one of the Epstein case followers.
We’re keeping a close eye on Nygard, not just because of the appalling nature of the alleged crimes, but he was a close personal friend of not just Prince Andrew, but Fergie too. Can you see a pattern forming here . . . . .