Why was there an ambulance on site? What was that domed structure?

Jen Tarran gives you a bird’s eye view of the small out post, which is part of the US Virgin Islands.

She tells you who went there, what was witnessed and what remains a mystery.

A small island in the Caribbean, it was Epstein’s main residence as listed in his final will.

The Island is in the US-governed Virgin Islands in the Caribbean. It’s about 70-odd acres and bird shaped ,no not egg shaped like his p***s, bird shaped.

The Jeffrey Epstein Island was bought by him in 1998, yes think about that, 23 years ago.He has had 20 to 21 years of history of being linked to child sex abuse.

Originally Little Saint James was on the market for about 10 1/2 million but an Epstein owned company bought it for 7.95, basically 8 million.

The Paris Apartment
Who is Story Cowles?

Its value is now listed at more than $60 million. It originally had a main house, guest cottages and a a staff house.

As well, a private desalination unit for freshwater along with a dock and a helicopter pad. You know perfect for a first homebuyer.

Fast forward a few years and the island also had a library, Japanese bathhouse cinema, lagoon stocked with flamingos (no less) and other structures, most of my opinion really bloody ugly.

One of these which has raised a hell of a lot of eyebrows and has been the seed of many a conspiracy theory is a blue and white striped building. Some have dubbed it a temple.

It had a gold roof dome on the top of it but that blew off during one of the 2017 hurricanes that battered the island.

Originally the structure was to be a music pavilion, according to development applications lodged in 2010.

The construction instruction doesn’t match those plans at all. The issue is the door seems to have a lock on it to lock people inside the building.

It’s rather strange after pouring through images and looking at drone footage, no one can get a clear idea what is going on with the doors.

What the building was useful of course the fact it was listed as the music room and Epstein was a trained pianist.

Or it may just be the music room.

While looking into the history and the rumours about Little St James Island, I came across so many beautiful images.

Despite the horror that some ‘guests’ or let’s face it, Epstein’s slaves, faced on this island, it is scenic.

There are cliffs, beaches, highly-manicured gardens and lawns.

There is no doubt the views are beautiful. And yes, it does look like a bird flying, with the beak to the left in this photo.

What really grabbed me were the weird things. And not just the buildings.

Like the cows and the parrots. I’m pointing the finger at Ghislaine for many of the bad decoration choices.

But Epstein loved to shuffle around in monogrammed slippers and sweaters thinking it made him look posh.

Yep, that’s a holstein friesian cow, your typical dairy cow. I still don’t know why they thought it would add to the island.

Unless they’d get liquored up and run around the island playing cow tipping at night?

Yep parrots. Again, why? For a real bird’s eye view, or a drone view, check out that FBI raid footage.

But my favourite find while digging was the Daily Mail interview with the housekeepers made in 2011.

One of the weirdest things was a reference to Prince Andrew staying at the island and how he was laughing about ‘pissing’ on someone.

Hmmmm, nice, and of of course she was in her 30s and a brain surgeon.

To read the full account of the housekeepers’ time on the island head to the daily mail.

Thanks for listening to The Prince and the Pervert chapter on Little Saint James.

If you have any ideas of what or who we should take a look at contact us on twitter, I’m Jen and I’m on @Ohreallytruly. 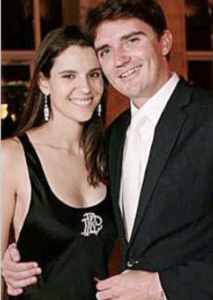 These two spent more time with Epstein when he was in jail than almost anyone else.

So what did they talk about with Epstein?

Sarah, who went by the name Sarah Kensington, reinvented herself as an interior designer after leaving Epstein.

She has since deleted the website for her business, SLK Designs, and married a former NASCAR driver.

Kellen was photographed with Epstein in 2012, so after he spent time in jail.

Plus Sarah is also covered by the  dodgy and shocking immunity deal from Florida.

Police were very close to arresting her in 2006 for two charges relating to sexual battery of minors.

Her boyfriend Florida socialite Story Cowles visited Epstein in jail in Florida almost 130 times between 2010-11.
At times, Cowles signed in as a paralegal, which he was not.
He spent six or seven hours a day with Jeffrey Epstein.

Cowles has a long and wealthy list of associates, according to this tweet thread,which is excellent reading.

He also lived in a home with Kellen in New York City, which was owned by an Epstein relative. My guess is the brother Mark.

The Prince & the Pervert Podcast takes you on an investigation into the world of Jeffrey Epstein. Frpm his early days as a child prodigy to his eventual arrest in July 2019 for sex trafficking minors.

As well, we explore how he got away with it all and why so many people were complicit in this global criminal conspiracy.

All the facts about Jeffrey Epstein, his connections to powerful people around the world, and how he was able to get away with so much.

The Prince and the Pervert podcast covers a global criminal conspiracy. It involves a prince, a jailed socialite.