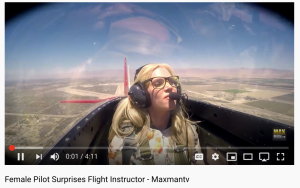 This is as awkward AF and cringey as hell – Epstein’s sex slave turned international pilot dons a teen nerd costume in the name of amusement.

Nadia Marcinko aka Gulfstream Girl turned Global Girl can be seen here on video pretending to know nothing about flying.

But she’s really a pilot and was a international fashion model (apparently).

Ha ha! That’s the joke –she’s dressed like a teen with pig tails carrying a teddy bear….but can fly a plane. Hilarious. Not.

She’s a smart sexy pilot but there’s nothing funny about Nadia and Jeffrey Epstein.

Words fail us and words are our business. WTF Nadia! Surprisingly, she can actually fly. Where is she today?

According to Wired.com, she was known as Gulfstream Girl on social media. She was Nadia Marcinko and before that Nadia Marcinkova.

“In The Miami Herald last year, Julie Brown reported that Marcinko was “brought” to the US from (the former) Yugoslavia to live with an abusive man more than 30 years her senior when she was 15. It’s not hard to imagine she’s adept at survival.”

Epstein had purchased her from her family in Yugoslavia,” and that “Epstein bragged he brought her into the United States to be his Yugoslavian sex slave.”

Wired added: “Nadia Marcinkova, by that name, first appeared in court documents, in Florida, about a decade ago. She was 22 then and had been in the US since 2000. She is one of the most prominent immigrants in the circle of Epstein, the accused child rapist and registered sex offender.”

Nadia was named as a participant in the sexual assaults Epstein committed and she may have been involved in soliciting victims for him. She was not prosecuted when Epstein was originally charged in 2008 because she had been underage and because it was beyond clear that she was a victim of Epstein herself.

But how far is too far if you’re a victim?  Or you become a participant to the abuse. Was there a situation where she was given no choice?  That she had to start learning the business side of it?

It’s not just being the victim but was there was blackmail involved? Was it a case of she no longer had any roots in the world, except for the small circle?  Nadia may not have had any where else to turn to.

But the thing is – are these Epstein Women associates or were they victims? Or is there Stockholm syndrome?

Along with Blackmail, photos, they film you, or you are suddenly trained up as a pilot or secretary role and you’re flying around the world.