Epstein’s Assistant: The alleged Epstein child recruiter, Sarah Kellen Vickers, applied for a foreign worker visa under the badge of her design company.

Mrs Kellen Vickers made the application under one of her aliases, Sarah Kensington.

The request for her design company SLK Designs was granted by the government (see below).

The US H1B visa is designed for temporary workers in certain occupations.

According to US Citizenship and Immigration, the visa is for holders to perform “specific services.”

Was it part of Epstein’s immigration rort

“Typically, companies file for individuals to come to the U.S. to perform services in a specialty occupations; these positions normally require bachelor’s degrees (or higher) in a specialty field,” it said on its website.

So why did she need a temporary visa for her interior design company ?

Epstein’s Assistant
The Other Women in Epstein’s Life

Sarah Kellen Ghislaine Maxwell’s alleged lieutenant, known also as Sara Kensington, claims she was abused by Jeffrey Epstein, and may also be stating she’s a victim of cult abuse.

In a few short years, Sarah Kellen went from being a teen bride to flying in Jeffrey Epstein’s jet with Bill Clinton.

We found new information concerning Kellen, the woman described as an Epstein coconspirator. It came to us via her husband’s website.

On our podcast, we explore how Epstein got away with it. Plus: why so many people complicit?

It’s the story of a decades long global criminal conspiracy, plus we present the Latest Ghislaine Maxwell News. 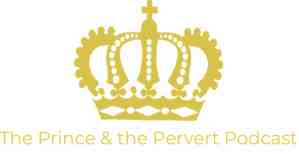 Listen to our podcast here

Epstein Girls: Today we are talking on the podcast  about the other women who were associated with dead pedophile Jeffrey Epstein.

The two of us analyse Ghislaine Maxwell’s crew with podcaster Bobby Capucci.

The Jeffrey Epstein Show host joins us live from Las Vegas to discuss:

The pedophile billionaire did not act alone because he had at hand a team full of females known as the Epstein women.

There was a team of females who enabled his nefarious desires.

Find out more about the Epstein girls and women in this post and the below podcasts and video.

Some people involved in the Epstein case may be getting very nervous. Has someone rolled to help the authorities?

Looking for the letter about the aristocrat? Click here.

“They were careless people,” writes F. Scott Fitzgerald of two of The Great Gatsby’s other characters, Tom and Daisy. “They smashed up things and creatures and then retreated back into their money or their vast carelessness or whatever it was that kept them together, and let other people clean up the mess they had made.”

Who was Epstein’s one true love? It wasn’t Ghislaine.

Support us for just $2-a-month on Patreon. Click here to learn more.

Clare Hazell, now believed to be known as Countess of Iveagh, aka Clare Guinness, is listed in the Epstein black books and on flight manifests.

The aristocrat is the estranged wife of the Earl of Iveagh, Ned Guinness, who is one of the richest people in the UK.

The farming baron is also a descendant of the family which built the Irish beer brewing dynasty.

Here they are (below) in happier times at their home in Suffolk (source: Dominic Bradbury). 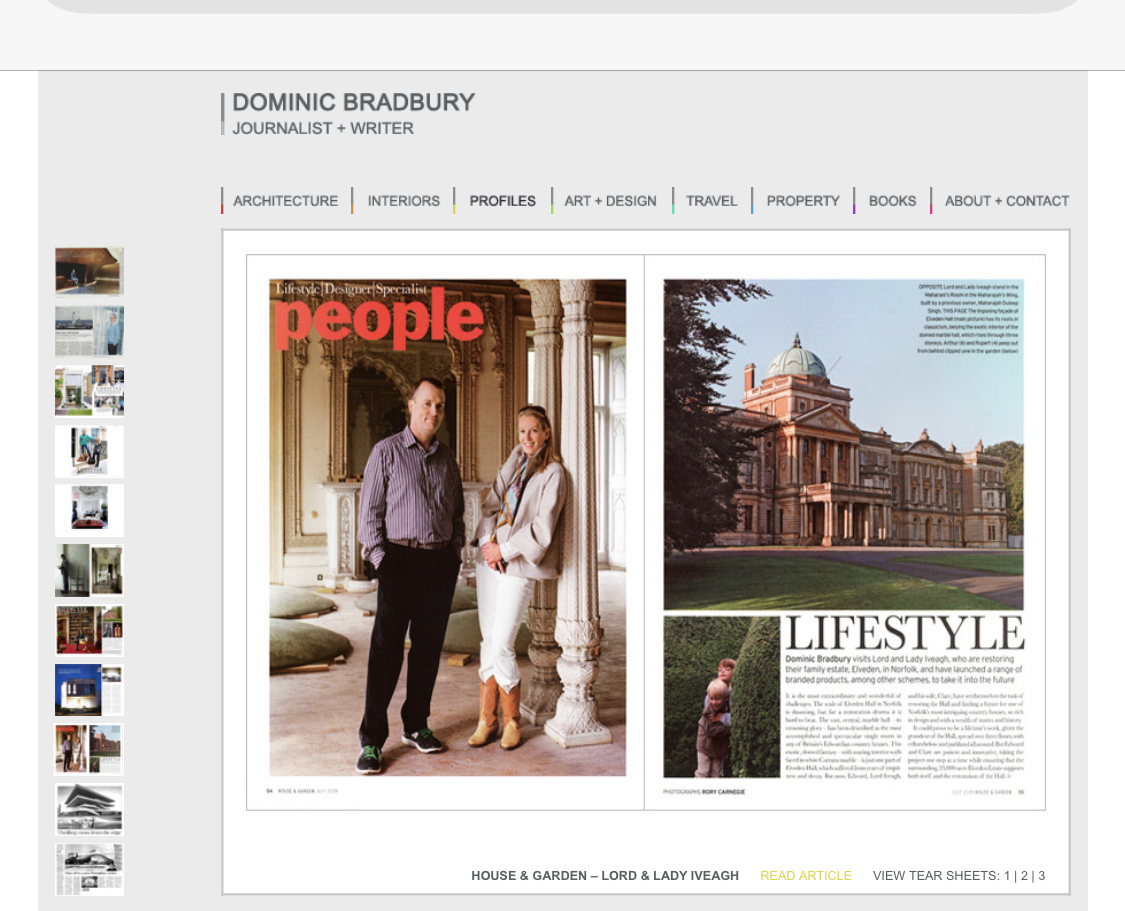 There’s a Clare Hazell in the Epstein flight logs who travelled on the dead sex offender’s jets more than 30 times.

That, however, doesn’t mean she was involved in the sex trafficking. We make no such allegation. 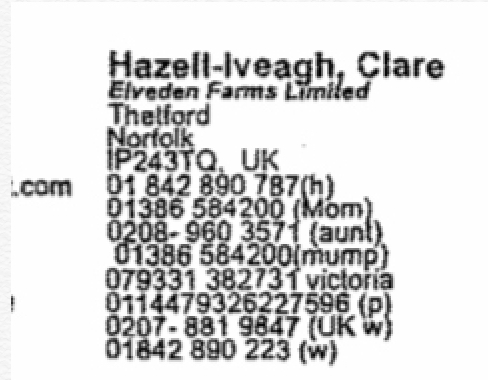 He added: “I can confirm that we have already asked to interview her.”

Mr Schiller represents victims including Virginia Guiffre— whose claims are central to the scandal engulfing the Queen’s son, Prince Andrew.

A Clare Hazell was said to have been friendly with Ghislaine Maxwell in the early 2000s.

The Countess Iveagh has also been the subject of lurid and, to date, unproven allegations by a survivor’s sister, Maria Farmer.

So what have we found out about Clare Hazell Iveagh?

It’s said she met Earl Ned Iveagh Guinness at a dinner party and they married in the family chapel in 2000. At the time, she was said to have been writing a children’s cook book.

They have two two teen children together.

The Countess of Iveagh was until last year the chair of a child welfare organisation, the NSPCC.

Her association with the group spurned a letter-writing campaign asking for the Hazell who was associated with Epstein to be removed from the position.

Want more? Support us on Patreon for just $2-a-month. Click here to join.

Ask us a question by emailing Snarkarellas at gmail.com

This is Sarah Kellen Vickers  (above right with her pervert boss Jeffrey Epstein), who now lives Miami with her husband, Brian Vickers, a former Nascar driver.

But who is Brian Vickers?

In an article that raised eyebrows throughout his sport, Vickers was described in Maxim in 2011 as partaking in a “relentless connoisseur’s pursuit of pussy in all its forms.”

Maxim reported: “The night is ending-or nearly. BV’s (Brian Vickers) crew wanders thirstily into the Hiro Ballroom. To a female companion, Vickers wonders aloud who the hottest chick in the room is, and they agree on a willowy blonde looking bored on the dance floor with a banker type.

At the time of the Maxim piece,  Brian Vickers was single and he stated the story was a stitch-up.

He married Sarah Kensington (as she was known) in 2013 in Wyoming. He has had investments in property in New York and a company which makes breast implants (see below).

He recently bought a $6million apartment in Miami, Florida.

He says on his website they both support the innocence project charity because they’d both been accused of things they didn’t do, which I think is a peek into his soul.

The Prince and the Pervert Podcast examines the cases of Jeffrey Epstein and Ghislaine Maxwell. We will cover everything from their arrests, to his trial, to his death.

How dud he get away with it all? Plus why so many people were complicit in this global criminal conspiracy?

And now, after much research and investigation, we’re ready to share our findings with you – every week! Subscribe now so that you don’t miss out on any episodes or updates.

All the facts about Jeffrey Epstein, his connections to powerful people around the world.

The show is hosted by two journalists who have been researching this case since 2019.

It dissects the world of Jeffrey Epstein & Ghislaine Maxwell.

Maxwell is facing new charges, including trafficking of a minor, in the latest development in the Epstein scandal, which has again thrown her name into the spotlight.

Ghislaine Maxwell – The woman at the center of the Jeffrey Epstein scandal.

Listen to the disturbing true crime podcast, The Prince & The Pervert Podcast, now on Apple Podcasts!

“When asked how long Mr. Wexner had occupied the property, Jeffrey Epstein, his protege and one of his financial advisers, replied, “Les never spent more than two months there.” Christopher Mason

Les Wexner House: The Columbus-based businessman, Les Wexner, who started Victoria’s Secret, embarked in the 1990s on an interior makeover of the former schoolhouse.

The re-vamp of the home, which had been vacant for years, was featured in the December 1995 edition of Architectural Digest.

Ummm there is a Picasso in the top photo in the Les Wexner house.

A real one. That’s some serious money. Who knew that clothing retail was so lucrative?!

A New York Times reporter, Christopher Mason, also wrote about the house around the time Epstein first took up residence.

Here’s some of what we wrote: “WHAT is the latest status symbol of the ultra rich? A spectacular residence they purchase for millions, reconfigure with the world’s leading architects and interior designers for even more millions, then elect not to live in.

Such is the fate of one of Manhattan’s largest town houses, a majestic stone mansion at 9 East 71st Street. Possessing some 21,000 square feet, the house was recently the uninhabited domain of Leslie H. Wexner, the founding chairman of the Limited Inc., the retailing company.

He bought the property in 1989 for $13.2 million and lavished tens of millions on renovations, art and furnishings.

When asked how long Mr. Wexner had occupied the property, Jeffrey Epstein, his protege and one of his financial advisers, replied, “Les never spent more than two months there.”

Those curious to see the princely accommodations Mr. Wexner abandoned housemneed look no further than the cover of last month’s Architectural Digest.

Visitors described a bathroom reminiscent of James Bond movies: hidden beneath a stairway, lined with lead to provide shelter from attack and supplied with closed-circuit television screens and a telephone, both concealed in a cabinet beneath the sink.

(The Les Wexner house) also has a heated sidewalk.

The seven-story house was built by the society architect Horace Trumbauer in 1933 for Herbert N. Straus, an heir to the Macy’s fortune, who died before it was completed. (Mr. Trumbauer also built Clarendon Court in Newport, R.I., the former home of Sunny and Claus von Bulow.) The Straus house later became a convalescent home and the Birch Wathen School, making Mr. Wexner the first private resident — or at least, the first private nonresident.”

Reached in Florida last week, Epstein confirmed the house was his home.”

The question remains – why was the Les Wexner House given to Jeffrey Epstein?