Listen to the Prince and the Podcast here

Maxwell’s Bestie Ariadne Calvo-Platero: What is it like to be lifelong best friends with the infamous Ghislaine Maxwell?

Speaker Jim Rohn once said: “You are the average of the five people you spend the most time with”.

Today we are going to talk about Ghislaine Maxwell’s aristocratic best friend to get more insight into the jailed socialite.

So who is Ariadne Calvo-Platero?

Besides once sitting on the board of Ghislaine Maxwell’s do-nothing charity, Calvo-Platero  shares a lot in common with her bestie:

1. Both their fathers were British politicians

2. They were both working in publishing

3. They are both living in America

4. Both fathers ended up broke

The Honorable Ariadne Calvo Platero is the daughter of Timothy Wentworth Beaumont, Baron Beaumont of Whitley. Her mother was a cousin of Lord Snowden, who married the Queen’s sister, Princess Margaret.

The couple has a mention in Epstein’s black book  and both have associations with children’s charities, although there are no allegations of impropriety.

According to Page Six, Ariadne Calvo-Platero  is part of an exclusive group of women in white known as “The Tennis Girls.”

“They play on summer weekends at Peltz’s Southampton home (with their own handsome pro, Marko, “The Croatian Sensation.”) They even have a rule: “You break it, you buy it,” which means if you cause injury with an aggressive ball, you pay for the surgery.”

Below: Another puff piece about Maxwell and Epstein by Vicky Ward, formerly of Vanity Fair. 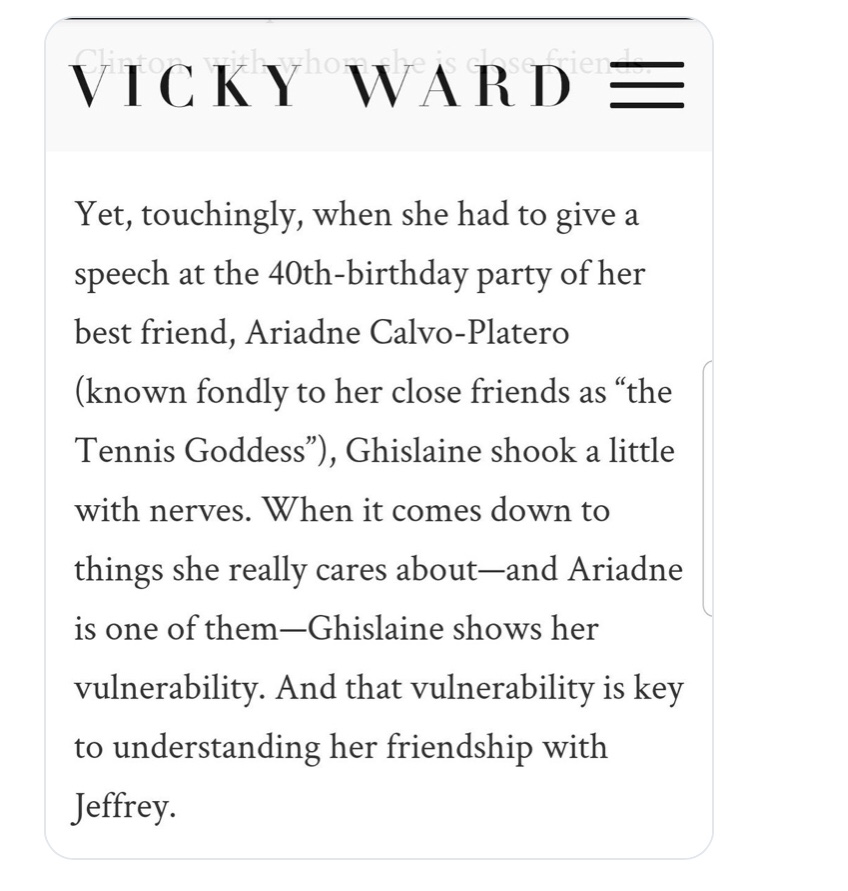 Ghislaine’s brother said some of  Ghislaine’s friends were in fear of being “cancelled” due to their association with the jailed socialite.

Ian Maxwell told Insider: “She deserves support and love and affection. And one of the reasons that this has not happened from third parties — or is so rare that it doesn’t really matter — is because of their fear of being canceled,

And opprobrium, and losing their jobs, and having their kids teased at school, and much, much worse.”

The Prince and the Pervert Podcast

Who else is associated with Ghislaine Maxwell

The Deposition Ghislaine Maxwell Didn’t Want You to See