Epstein Video: The New York Academy of Art was so unapologetic about its relationship with billionaire pedophile Jeffrey Epstein that it still showcases video of the dead sex trafficker. 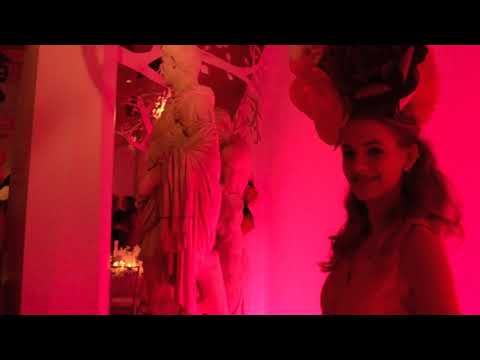 A blonde female can be seen viewing the art with the now-dead pedophile at the academy’s 2014 star-studded Tribeca Ball.

According to the academy, Epstein also donated $30,000 to the school that same year.

We believe the other person in the video is Julia Stepanova, an Epstein Associate. Here she is pictured at the ball with a model also associated with the dead pedophile.

Epstein, who died last year in jail, was a long-term supporter of the academy and sat on its board from 1987 to 1994.

We believe this is some of the last public Epstein video of Epstein before his death.

Survivor Maria Farmer has made salacious claims about the academy’s chair , Eileen Guggenheim, who took art students to Epstein’s New Mexico ranch. They have been denied by the academic.

Listen to our podcast about the Epstein footage

In a report issued in June, written by its lawyers, the academy attacked Ms Farmer’s claims.

The Daily Beast said the report stated, “Farmer as an unreliable narrator and uses discrepancies in her court testimonies to prove her “dubious credibility. It says that Mrs Guggenheim “played no role” in Farmer’s relationship to Epstein.“

At the time, it was condemned for victim shaming.

Jim Walden, a representative for the law firm that produced the report, issued a statement to The Daily Beast: “In a world where people’s lives and reputations can be forever ruined by untested allegations, it is not ‘victim blaming’ to hold people—even the victims of crime—accountable for their words,” Walden said.

“Here, without taking away from Ms. Farmer’s terrible experiences with Epstein, her allegations against the Academy and Ms. Guggenheim are false, and the record in this regard is quite clear.”

According to the academy back in January:

“Epstein served as a board member from 1987-1994. Both men left the board in 1994. When Epstein returned to New York after serving his prison sentence in Florida, he purchased tickets to one fundraising event in 2012 and two events in 2014.

There was no inappropriate contact or behavior during this time period that we know of. However with the benefit of 20/20 hindsight we wish we had barred him from the premises.”