Ghislaine Maxwell is probably the most talked about woman in America this week, but we are here to bust some myths.

What is she accused of?

Epstein black book: Two documentaries and countless articles have this month made their way into headlines.

So too has the myth making, in particular the ownership of Epstein’s black book.

What if the book with the names of the rich, powerful and famous was instead Ghislaine’s address book?

Listen to the episode

The Prince and Pervert Podcast is busting myths about this controversial woman, as well as clarifying misconceptions circulating among other media outlets.

As the Ghislaine  Maxwell trial nears, it is important for us to be vigilant so that only fact-based information gets out there.

The Prince and the Pervert is putting newly aired information under scrutiny before it enters the lexicon as “truth.”

We tell the stories of the Jeffrey Epstein survivors, who are now women. It’s a huge honour and privilege.

But when it comes to Jeffrey Epstein’s enablers, we don’t hold back.

We have more than 150 episodes on Jeffrey Epstein & Ghislaine Maxwell and have been researching this case for almost two years.

This is where you’ll find all the facts about Jeffrey Epstein, his connections to powerful people around the world.

Plus how he was able to get away with so much? 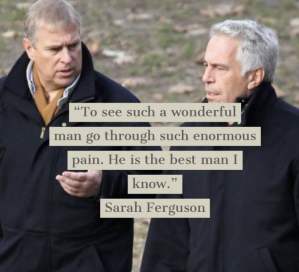 Who is Les Werner

We are investigating the Ghislaine Maxwell case and  connecting all the dots for you every week on our show!

What does it say about society that one of the most powerful men in America, with friends in high places, was murdered under mysterious circumstances while behind bars awaiting trial?

These are the questions we’ll attempt to answer on this podcast as we explore one man’s life through his death…and beyond.

Join us every week as we figure out where Jeffrey Epstein and Ghislaine Maxwell came from. We promise you won’t want to miss it!

Support us for just $3-a-month on Patreon.
Find us: Twitter: @lisapodcasts and @ohreallytruly.
Visit us at Facebook at the Prince and the Pervert Podcast https://www.facebook.com/groups/2320529864930349

The Epstein Maxwell Criminal Conspiracy Who is Ghislaine Maxwell today? And who was Jeffrey Epstein?

Do you have questions about Jeffrey Epstein and Ghislaine Maxwell ?

We have the answers on The Prince and the Pervert Podcast.

Epstein was a billionaire, a convicted sex offender and friend of the rich and famous.

This is where you’ll find all the facts about Jeffrey Epstein, his connections to powerful people around the world, and how he was able to get away with so much.

We are investigating the Jeffrey Epstein case and are connecting all the dots for you every week on our show!

What does it say about our society that one of the most powerful men in America, with friends in high places, could be possibly murdered under mysterious circumstances?

And what do their connections to foreign governments mean for American national security?

These are just some of the questions we’ll attempt to answer on this podcast as we explore one man’s life through his death…and beyond.

Join us every week as we try to figure out where Jeffrey Epstein came from and how he got away with so much for so long. We promise you won’t want to miss it!

Here’s where you will get your Epstein news. Plus hear our take on who is Ghislaine Maxwell today.

Support us for just $3-a-month on Patreon.

Visit us at Facebook at the Prince and the Pervert Podcast

Here’s where you will get your Epstein news.

Plus hear our take on who is Ghislaine Maxwell today.

He is a former model agent partner of  the dead billionaire Jeffrey Epstein.

Brunel, who was accused of sexual assault, ran the notorious business MC2. It had offices in Miami, New York and Paris.

It is the latest turn in an international investigation into sexual assault allegations.

Jean-Luc Brunel is suspected of organising the “accommodation of young girls or young women on behalf of Jeffrey Epstein”.

Jean-Luc Brunel was charged with sexual harassment and the rape of minors over 15 years old, including Virginia Giufree.

He is suspected of having committed acts of rape, sexual assault and sexual harassment on various minor and adult victims.

In particular, Jean-Luc Brunel allegedly organised the transport and accommodation of young girls or young women on behalf of Jeffrey Epstein.

The Prince and the Pervert Podcast helps you make sense of the Jeffrey Epstein case. No outlandish theories here.

We stick to the facts and vet our sources of information.

Jean-Luc Brunel Jeffrey Epstein did not act alone. He was enabled by a crew of many who served his nefarious desires.

Find out more about the other female players in this filthy Epstein quagmire in this post and the below podcasts.

Story Cowles: Does Jeffrey Epstein’s former male assistant, Story Cowles, have the keys to the secrets of the dead billionaire’s kingdom?

His family heritage includes a Standard Oil descendent, a Palm Beach town mayor, a sugar baron, and a house which belonged to a Vanderbilt.

The unusual path of this socialite includes a step-father who was one of Epstein’s many lawyers.

Story’s mother, Elizabeth, was married to the high-profile law counsel, William Atterbury III, a Pennsylvania Railroad heir. His aunt, Nicole Fanjul, is married to one of the richest men in Florida, the sugar baron, Alex Fanjul.

His step-grandfather William Evarts Benjamin II, was a developer who became mayor of Manalapan.

According to The Palm Beach Post, Benjamin bought and lived in a house previously occupied by heiress Consuelo Vanderbilt Balsan:

Despite all this apparent privilege, Story Cowles ends up working for years for Epstein.

Flight logs reveal he flew to The Bahamas on the Epstein jet. As well, he also lived with Sarah Kellen, a listed Epstein conconspirator, in the model apartments in New York.

Around the time he met Epstein in 2006, Story Cowles was a party promoter for some of the swankiest events in Palm Beach.

In 2006, he graduated with an associate’s degree in art studies from Florida State University.

About 10 years later, he graduated from Lynn University with a Master of Business Administration. He has a Bachelor of Business from the same institution.

Yet his name was mentioned in a deposition made by one of Epstein’s pilots in Epstein v Edwards 2011 (see below).

Authorities believe the now-dead pedophile was using Story Cowles to serve as his emissary.

Prison records obtained by DailyMail.com showed he visited Epstein almost every single day prior to his being granted work release.

(He) would arrive in the morning on most days, stay for a few hours and then leave around lunch time. He would then return a second time and leave again around 7pm, generally logging six or seven hours in jail each day as a result, despite he himself having committed no crime. Epstein tried to hide his association with Cowles by having him sign in as a paralegal, as only lawyers and a doctor were among the 20 approved visitors at the jail.

So what does the Palm Beach socialite know about the Jeffrey Epstein criminal conspiracy? A lot, according to visitor logs from the dead pervert’s prison records.

It was argued through lawyers that much of what he discussed with Epstein was subject to attorney client privilege.

Except in this case, Story was not a lawyer nor was he a paralegal, despite claiming he was on prison visitor logs.

One of Epstein’s household staff told the court in 2008, Story was present during a visit to Epstein’s Palm Beach house by the disgraced French model agent, Jean-Luc Brunel. The Frenchman is now awaiting trial in Paris on sex abuse charges.

According to the court transcript (below), Epstein coconspirators Nadia Marcenko and Sarah Kellen were also present.

Story possesses the metaphorical keys to the Epstein kingdom but up until now he’s been remaining silent.

When we contacted him at home a few days ago in North Carolina, where he works in finance, he was busy and unable to speak.

Legal argument during Jane Doe v Epstein 2008 covered the possibility of Story Cowles having knowledge about Epstein sending money to the Channel Islands and Israel.

Adriana Salazar: Jeffrey Epstein was one of America’s most powerful men and Adriana Salazar was a Polish model with stars in her eyes.

Together, they were both accused of recruiting young girls and women for sex trafficking.

Listen to The Prince and the Pervert Podcast

The former model, now an accountant in Florida, was allegedly one of the core four conconspirators who helped recruit girls for Epstein.

Before that, she had some modelling success in the early-2000s and appeared in a Fashion TV reality show called Model Flat. She can be seen in this clip.

In fact, she was listed on the controversial Alan Dershowitz-masterminded 2008 plea deal as a coconspirator.

As well, she was at the centre of another claims about allegedly removing some of Epstein’s computers before a law enforcement raid, according to statements made to police.

In fact, when police raided Epstein’s Palm Beach home, they found signs of computers but none of the hardware.

Salazar, according to Epstein staff, had managed to get them out of the house before authorities arrived.

This was just after her Model Flat television stint in Miami.

Salazar has been hiding in plain sight in Miami, Florida, since Epstein died in 2019.

Listen to us to:

• Learn the real story of Jeffrey Epstein and his connections

• Be aware of the forces that enable sexual exploitation and trafficking.

The last public sighting of her was in 2019 when she fled the media in tears outside a church in Miami.

Her name crops up in Epstein-related legal depositions over the years but, as Agent Hades states, Adriana hasn’t said much.

So who is she? Find out on this episode of The Prince and the Pervert.

Plus on the podcast:

More documents made public in US v Ghislaine Maxwell

The Prince and the Pervert helps you make sense of the Jeffrey Epstein case.

No outlandish theories here. We stick to the facts and vet our sources of information.

Our podcast is an open minded and meticulous look into Jeffrey Epstein’s world.

Have a conversation with Lisa & Jen as they work to uncover the truth about the Jeffrey Epstein Prince and Pervert conspiracy.

The Jeffrey Epstein Case vetted and free from outlandish theories.

We tell the story behind the headlines.

This is the podcast that helps you make sense of the Jeffrey Epstein case.

– The Prince and the Pervert Podcast:

– Who’s next in this human trafficking scandal?

The other women who helped Epstein